They are only found in the Mesoamerican Hub. They are quick like the Were Jaguar, but also much stronger and will rush into attack, often when you didn't know one was there. However, they don't have a ranged attack so they can be picked off from afar. Also, just like Were Jaguar, they become invulnerable state during when they roar. 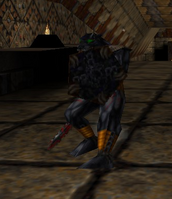 Were Panther blocking attack from the player

Corpse
Add a photo to this gallery
Retrieved from "https://heretic.fandom.com/wiki/Were_Panther?oldid=10239"
Community content is available under CC-BY-SA unless otherwise noted.