War is one of the Four Horsemen of the Apocalypse, general of Eidolon, and the fourth boss encountered in Hexen II.

War is the toughest of the Four Horsemen and will give the player a hard time. He will break off the wall of the Arena for his grand entrance and begin to throw Double Axes that home in on the player. Once his health is reduced to half, he will throw a red variant of double axe that will deal massive damage to the player if they're not careful. Once he is defeated, the player will teleport back to Blackmarsh to confront Eidolon. 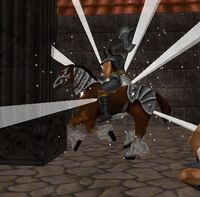 War defeat
Add a photo to this gallery

Retrieved from "https://heretic.fandom.com/wiki/War?oldid=10526"
Community content is available under CC-BY-SA unless otherwise noted.