Temporarily increases the power of your weapon.
Tyketto's Tome of Power is a powerup artifact found in Heretic and Hexen II.

When invoked, the Tome will increase the power of all weapons for 40 seconds. It can also be used to reverse a Morph Ovum's chicken transformation in multiplayer games. 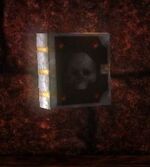 The Tome is rarer in Hexen II, but pretty much essential to have when taking on bosses. Like its predecessors, it temporarily increases the power of all your weapons when invoked.

Retrieved from "https://heretic.fandom.com/wiki/Tome_of_Power?oldid=8198"
Community content is available under CC-BY-SA unless otherwise noted.