The Sabreclaw is an enemy encountered in Heretic.

Their only attack deals little damage, and they tend to be knocked back a considerable distance by most attacks. Their only real advantage is that they move quickly and are often found in groups. One or two Sabreclaws can be kept at bay with the Staff, though more usually require the Ethereal Crossbow. 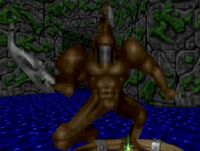 View Sabreclaw close-up and further away.
Add a photo to this gallery
Retrieved from "https://heretic.fandom.com/wiki/Sabreclaw?oldid=9547"
Community content is available under CC-BY-SA unless otherwise noted.