100
An Ogle is a docile creature encountered in Heretic II.

An Ogle is short, pathetic looking creature that lives in the darkest part of almost any mountain range. They are very timid by nature, preferring to hide instead of confronting danger. Only when they are directly attacked do they defend themselves; if any of their number is attacked, they generally will strike back at the assailant as a group.

Ogles have always been the workers of Parthoris. Their small stature and non-combative attitudes have forced them to pound their survival out of the mountains. Preferring to hide and avoid contact with the outsiders, the Ogles generally live in the shadows of the many mountains of Parthoris. Here, they mine and work the metals that they extract from the rock. Their metalworking skills are renown throughout Parthoris.

Unfortunately for them, their meek nature has also made them prime targets for slavery. Over the centuries, the Ogles have been captured and forced into slavery countless times by the more dominant races of Parthoris.

Several weeks ago, a young Ogle man staggered into Andoria. He told of gigantic merciless overlords that have enslaved their people. They have been put to work, mining precious metal and earthblood in the World's End Mountains. I fear what this could mean for the rest of Parthoris.

- Addendum by Siernan, the Healer of Andora 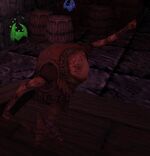 The Ogles are the enslaved people who work in the mines. They are generally friendly unless attacked. If Corvus attacks their Seraph Guards, they will join into the assault. They exhibit joy upon the deaths of the overlords.

Many Ogles can also be found crucifed into the Cloud Fortress.