Heretic
Heretic: Shadow of the Serpent Riders
Hexen: Beyond Heretic
Hexen: Deathkings of the Dark Citadel

The Portals of Chaos (Boss)
The Ophidian Lair (Normal Enemy)

Flame Orb
Mystic Urn (Rare)
The Maulotaur is an enemy encountered in Heretic, first fought as a boss at the end of Hell's Maw and later as a normal enemy in subsequent episodes.

It also appears in Hexen: Beyond Heretic and its expansion via the Dark Servant artifact, where it becomes your temporary ally.

If the player gets too close, the Maulotaur will charge in at high speed for a Melee. Although it moves fast, the player can easily outrun it and also get a few good shots off with the Hellstaff and/or Phoenix Rod.

The Maulotaur launches five balls of fire in an arc towards the player.

The Maulataur forms a trail of fire towards the player that can travel over anything and seemingly through walls. As well as dealing damage with a direct hit, the trails also standby for a few seconds and due to the speed of the attack, the player can find him/herself blocked in by multiple trails. If the player walks into one of these trails, it will deal massive damage. 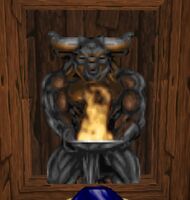 A brazier in Cronos resembling a Maulotaur.
Add a photo to this gallery

Retrieved from "https://heretic.fandom.com/wiki/Maulotaur?oldid=9823"
Community content is available under CC-BY-SA unless otherwise noted.