Various Projectiles
Activates Traps
Teleportation
Summon Monsters
Korax is an enemy encountered in Hexen, one of the three Serpent Riders, and the main antagonist of the game.

He is confronted after completing the Necropolis and entering the Dark Crucible. You must first attack him vigorously until he retreats at half health, then kill all the minions he has left behind before pursuing him further. Korax has plenty of health, and can take a lot of damage before finally dying.

Korax launches projectiles from each of his six arms simultaneously. These projectiles consist of the ranged attacks from various non-boss Hexen enemies such as the Slaughtaur, Stalker, Green Chaos Serpents, Brown Chaos Serpents, Reivers, and Afrits. Interestingly enough, he will never use a Dark Bishop's or a Wendigo's attack.

Korax can summon traps, including spikes, fireballs and turning the ground to lava.

When Korax reaches half health, he summons Ettins and Centaurs and when you find him again he summons Serpents and Dark Bishops from two rooms on the side as well as ghostly Ettins, Centaurs and Chaos Serpents.

On the second meeting with Korax he can teleport around the room, a similar ability by D'Sparil.

Have some Icons of the Defender, plenty of Repulsion Discs and good luck. 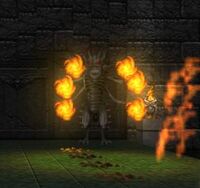 Korax's remains after defeated
Add a photo to this gallery

Retrieved from "https://heretic.fandom.com/wiki/Korax?oldid=9868"
Community content is available under CC-BY-SA unless otherwise noted.