These green eyed soldiers appear everywhere and are very accurate with their arrows, so keep moving. They tend to be scattered thinly but occasionally are in groups which are particularly nasty.

The recommended weapon is the Gauntlets as they can kill a Knight Archer in 3 hits. Plus due to the number you will face, this will greatly save your Mana for more difficult enemies/encounters when you need it.

When fighting one archer, get within 10 feet of it and wait for it to attack. Dodge the attack and if the archer takes a rest, move in for the kill. If you are confident enough, you can kill the archer straight away with the gauntlets or sword. If not, land your attack and back away. Once the archer attacks again, move back in to finish the job.

Be aware that the archer may fire multiple arrows at a time. Do not attempt attack during this fury. Instead stand back and dodge or take cover until the archer stops the attack. After a while it is easy to know when to make your move. Due the amount of Knight Archers in the game, every player will quickly become adept at killing them with little to no problem.

When facing multiple archers however it is best to take cover as dodging two or more lots of arrows can become difficult. 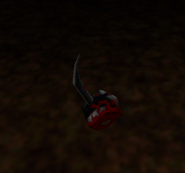 Knight Archer Ice Variant.
Add a photo to this gallery

Retrieved from "https://heretic.fandom.com/wiki/Knight_Archer?oldid=10454"
Community content is available under CC-BY-SA unless otherwise noted.