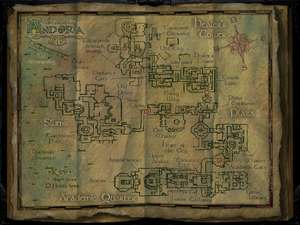 The Ssithra city of Andoria is the second hub of Heretic II. It is accessed through an entrance in the Darkmire Swamps.

Due to the amphibious nature of its inhabitants, many areas of the city were deliberately built underwater. There are several water tunnels that serve as "elevators" between the different floors of certain buildings. The city is built exclusively of stone and some rooms feature simple stone furniture.

The reign of D'Sparil left its mark on the city, causing large parts of it to sink deeper into the swamps it was built upon. Because of this, some old buildings have fallen apart, and some tunnels have been flooded. The infected denizens of Andoria have retained much of their fighting skills and will pose a greater challenge to the player. They prefer to ambush their victims underwater, where they have an advantage.

The player's first objective is to find the renowned healer, Siernan. He is working on a cure that could stop the plague, yet he needs a Sea Crystal and a Vial of Earthblood in order to do so. Corvus will have to search the city for these items. Once accomplished, Siernan will send the player to the city of K'Chekrik, on a perilous journey through the Kell Caves and the Katlit'k Canyon.

Retrieved from "https://heretic.fandom.com/wiki/Hub_2:_Andoria?oldid=8805"
Community content is available under CC-BY-SA unless otherwise noted.