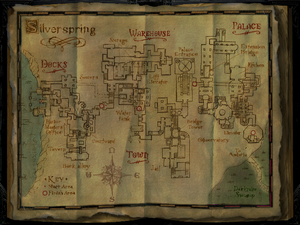 The Sidhe town of Silverspring is the first hub of Heretic II.

Known as the City of the Damned during the reign of D'Sparil, Silverspring was reclaimed by the Sidhe after the Serpent Rider's fall. It is a distinctive medieval city, with a lot of furniture and smaller decorative objects throughout most areas. The coming of the plague has thrown the city into disarray, as the infected run amok in the streets. Many buildings have been damaged and some areas are flooded.

The player's main task is to first find out what's going on, and then to make his way to the Palace. He must confront the maddened leader of the city known as the Celestial Watcher. After accomplishing this, Corvus will then have to travel through the treacherous Darkmire Swamps in order to reach the city of Andoria.

Retrieved from "https://heretic.fandom.com/wiki/Hub_1:_Silverspring?oldid=8804"
Community content is available under CC-BY-SA unless otherwise noted.