"Hexen II" is the third and final game in the Serpent Riders Trilogy, succeeding Hexen. It follows four different heroes across the world of Thyrion as they battle against the forces of Eidolon, the last and strongest of the Serpent Riders, and his Four Horsemen of the Apocalypse.

The game was developed by Raven Software and published by id Software on August 31st, 1997.

The Four Horsemen of the Apocalypse lurk in the shadows before you. They are Death, Pestilence, Famine, and War. They are the root of all that is evil. They are the least of your worries.

The last known Serpent Rider, Eidolon, lives. As the Necromancer, the Assassin, the Crusader, or the Paladin, you must defeat the dark generals and their Hell-spawned legions before you can face the Archfiend and attempt to end his ravenous onslaught. Go in peace and you will surely die.

Hexen II is similar in concept to its predecessor. There are four characters to choose from; an Assassin, a Crusader, a Necromancer and a Paladin, each with different attributes, skill sets, advantages and disadvantages. The game has a Hub based design with your character having to return to a central hub after completing tasks and puzzles in the surrounding levels. However, unlike Hexen, the characters in the game gain experience which enhances their skills and gives them special abilities.

The backstories of the four characters are also written out in greater and more varied detail. Whereas they represent each of the continents and societies of Thyrion similarly to the three characters in Hexen, they are also provided with their own motivations for pursuing Eidolon. Whereas the Crusader and Paladin are more typical heroes looking to avenge their societies and eradicate Eidolon's evil, the Necromancer is a villain who sees Eidolon as competition, whereas the Assassin, the first playable female character in the series, is a robber looking for a bigger challenge to despoil.

Before fighting Eidolon, the chosen hero first needs to defeat his generals, the Four Horsemen of the Apocalypse, who each reside in a different part of the world.

The game consists of five hubs:

Each character in the game has a unique set of weapons: 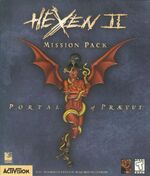 The Portal of Praevus expansion added an additional 2 Hubs, new enemies, and a new character class with her own weapons and abilities: The Demoness. It follows the 5 heroes in an attempt to stop the dark wizard Praevus from resurrecting the Serpent Riders to use under his control.