The game was developed by Raven Software and published by id Software on October 30th, 1995. It has the largest number of ports and the only game in the series to be ported to consoles.

Heretic chronicled the adventures of a heroic Sidhe elf who challenged the forces of D'Sparil, the weakest of the three dimension-traveling Serpent Riders. His victory was hardly insignificant, but while he battled D'Sparil, the other two Serpent Riders were far from idle. They were hard at work sowing the seeds of destruction in several other dimensions. One such dimension is Cronos, the world of Hexen; a human world, but one where the forces of magic are both stronger and more strictly controlled than those of the Elven world.

The humans have learned from painful experience that while magic can be a powerful tool, it also contains more destructive potential than any other force in their universe. From this harsh realization a disciplined and orderly society has developed, one where every citizen knows his place, and where the vast majority of common men are held in thrall to a few ruthless, powerful leaders. Wielding magical powers and arcane artifacts, these men overshadow every other human force on Cronos, suppressing individual thought and action in the name of the greater good.

Within this strict order, three organizations maintain the fabric of human society; the Legion, the Arcanum, and the Church. In an uneasy balance often threatened by petty squabbles and escalating power struggles, these three organizations share absolute dominion over all humanity. The Legion represents human military strength, using brute force backed by magical weapons to impose a strict and inflexible order upon the populace. The Arcanum is the center of learning for all magical studies, and as such it determines who will or will not have access to its wealth of arcane secrets. The Church acts as a bridge and buffer between the Legion and the Arcanum, using a mixture of magic and military training to maintain the balance of power while secretly furthering its own interests. Together or separately, these three groups control every aspect of human life.

Each organization is lead by a single man; Zedek, Marshal of the Legion; Traductus, Grand Patriarch of the Church; and Menelkir, Arch-Mage of the Arcanum. These men are the ultimate embodiment of power on Cronos. Cold, calculating and devoid of concern for anything but the advancement of their own status, these leaders were the first to fall under the sway of Korax, the second of the three Serpent Riders. In return for their allegiance, Zedek, Traductus, and Menelkir were rewarded by Korax with the dark gift of Unlife. Using the powers granted to them by Korax, as well as the relics already in their possession, all of humanity quickly fell under their spell.

Only three humans escaped the geas of the leaders' new powers; Baratus, a warrior of the Legion; Daedolon, a Mage of the Arcanum; and Parias, a Cleric of the Church. Now these three have sworn to destroy the leaders they once followed, and anything else that gets in the way as they execute their task. Entering the mystical portal used by Korax to reach their world, the three become hopelessly separated, forcing each of them to attempt on their own that which they had little hope of doing together; find Korax's stronghold, defeat his legions of grotesque minions, and finally destroy the Serpent Rider himself.

Their task will be a difficult one indeed. It is well known that Korax's special powers stem from his control over the Chaos Sphere, which he uses to warp and corrupt everyone and everything he touches. Though not the mightiest of the Serpent Riders, Korax is far more powerful that D'Sparil was, and his lust for power is matched only by his hatred for all living things not under his control. Can he be vanquished? Only time will tell.

The player is given a choice of three different characters to play as, each with a unique set of weapons and skills, as the three characters are each representatives of the Legion, Church, and Arcanum of Cronos respectively. All non-starter weapons are powered by Mana, which can be picked up over the course of the game.

There are five Hubs in Hexen. Each hub level is connected to several other levels, which the player can travel between. This is usually necessary after completing tasks and puzzles in the surrounding levels.

Deathkings of the Dark Citadel 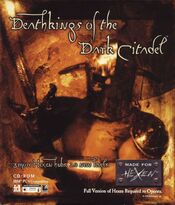 The Deathkings of the Dark Citadel expansion added 20 additional levels spread across three Hubs, and an additional 6 Deathmatch levels. The levels are considered to be more challenging than those of the original game.

CD
Add a photo to this gallery

Retrieved from "https://heretic.fandom.com/wiki/Hexen:_Beyond_Heretic?oldid=10450"
Community content is available under CC-BY-SA unless otherwise noted.