"Heretic" is the first game in the Serpent Riders Trilogy, following the Sidhe elf known as Corvus as he battles the forces of D'Sparil and his Order across various realms.

The game was developed by Raven Software and published by id Software on December 23rd, 1994.

When you first saw the seven candles, you knew. You knew - but any Sidhe would have known in the magic of the reflections pulsing across the ceiling of the Elder's chamber: each flame with its own power to burn, each flame tied irrevocably to the flow of the Earth's breath - the seven flames were the armies of the seven kings of Earth. Circling the candles stood the Elders of the Sidhe, leaders of an ancient elf race adept in arcane sorcery and keepers of the Tome of Power.

From the East came the evil foretold by your forefathers: the three Serpent Riders, guardians of death everlasting. Their form was shrouded by black cloaks. Only their eyes were revealed; sunken with evil, dreadful intensity. As a sign of power they brought peace to the Eastern provinces. Those who believed in the sign created a temple in their honor; and it bore the mark of the crossed trident. Their worshipers were the Order of the Sign; blind followers, without will, void of spirit. As the power of the Order grew, even the seven kings of the Earth followed like cattle behind them. And after they controlled the great nations two Riders left the world. Only D'Sparil, the weakest of them remained while his disciples traveled the earth cleansing it in preparation for its descent.

Scorned by the other people of Earth, the Sidhe possessing powers of their own, remained unaffected by the spell of the Riders. The Sidhe are now considered the Heretics, the unclean, fit only to be wiped from the face of the Earth. The disciples of D'Sparil conspired with the kings of the earth to remove the last lands of apostasy. And while the armies of the seven nations gathered to destroy the Sidhe, the Elders convened to discuss the fate of your people. When all voices had spoke against the Order, the seven Elders extinguished the seven candles flames simultaneously. At that silent instant, a brilliant flash of light came from the east and the armies that had gathered against you were no more. Drained by their efforts, the Elders fell to the floor, listening to the single painful scream echoing from the now-scorched battlefield.

But then the forces of the Abyss took their vengeance. The ether had quaked with the Elders' magic effort, and the curse of the Order followed the trail unerringly to the Elders' conventicle. Suddenly the foul odor of death came and the earth opened to engulf the Elders in flames; the white-bright fire clinging to their flesh, knowingly and eagerly eating each layer of skin. Too, pouring forth from the earth like squirming maggots, came the forces of evil both beast and undead. They attacked in hordes like packs of dogs, first surrounding the weakest and biting and clawing their victims to the ground. As each Sidhe fell several beasts would gather to chew into their bellies like pigs into slop, their heads often deeply submerged into the gut with the victim's intestines slung half-eaten upon their own squirming bodies. When the day was done, the few remaining Sidhe were scattered throughout the land. The Abyss had taken the tomes and artifacts of your people as spoils of their victory. Alone, without weapons, the surviving Sidhe would surely perish at the hands of the Order of the Triad. The Elders' destruction of the seven armies had gone for naught.

While the other Sidhe had hid, their spirit broken, you thirsted for vengeance and rode East into the wilderness, in search of D'Sparil. Now you stand before the City of the Damned, its air thick with the stench of rot. Your hate drives you to see these creatures oozing their heart's ichor before you. Beyond these gates the dead and the creatures of the night writhe in dark corners, their bodies aching for your blood. With luck, some of your peoples' ancient artifacts can be found hidden amongst the dark passages beyond. For with only a staff as your weapon, the world is surely damned.

Heretic is divided into three episodes, following the player across different realms under D'sparil's control. Players can select any episode they wish when they start a new game, yet it is highly recommended that they are played in order, due to the gradually increasing difficulty and the development of the in-game story.

There are 5 different difficult levels you can choose at the beginning of each episode (using poorly understood early English at their labels), ranging from beginner to extreme.

Note: Enemies with an * also have a ghost form, rendering them impervious to certain projectiles.

Shadow of the Serpent Riders 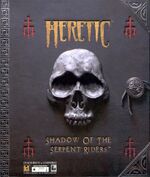 The Shadow of the Serpent Riders expansion pack added two additional episodes that continue the story after the first three. Episodes 4 and 5 are intended for more experienced players and thus are more challenging than the previous three.

Case - Back
Add a photo to this gallery

Retrieved from "https://heretic.fandom.com/wiki/Heretic?oldid=9286"
Community content is available under CC-BY-SA unless otherwise noted.