Missile Stream (5-25 Dmg)
Bouncy Fireballs (7-35 Dmg)
Reflective Shield
Summon Dark Bishop
The Heresiarch is a boss enemy encountered in Hexen. He is fought twice in the game - Once at the end of Heresiarch's Seminary, and a second time in the the Gibbet. 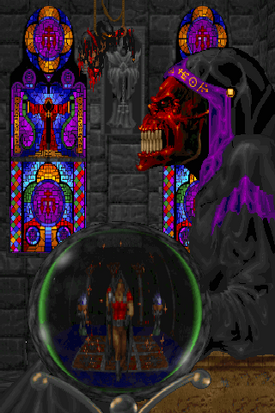 The Heresiarch is one of Korax's top ranked servants and the administrator of his newfound religious cult. He is a rather tall demon with red skin who wears black robes with purple patterns and the symbol of the Serpent Riders on the chest. He also possesses great mastery over the arcane arts and is able to manipulate the very essence of mana at will; this takes the form of three magical cubes that circle above his head.

The Heresiarch is first seen at the end of the original Heretic episodes, observing Corvus as he leaves the Crystal Domes.

As a master of magic, the heresiarch possesses a repertoire of spells in combat:

With 5000 hit points and great offensive and defensive capabilities, the heresiarch is a formidable opponent. The player must not hesitate in using the most powerful artifacts and weapons at his disposal. Keep in constant movement to avoid his attacks and watch for his shield to drop, then attack him with your fourth weapon. Rinse and repeat, collecting mana that may have been left on the map.

Retrieved from "https://heretic.fandom.com/wiki/Heresiarch?oldid=9921"
Community content is available under CC-BY-SA unless otherwise noted.