The Docks
The Cathedral (Ghost Form)

The Golem is an enemy encountered in Heretic.

The Golem is a humanoid creature mostly encased in some kind of stone. They are one of the first enemies encountered and are very common through most of the game.

There is a more powerful variant of this creature known as the Nitrogolem.

They have only one form of attack, in which they can punch the player at close range. Upon their death, their body bursts open, releasing their spirit. They also have a chance to drop a Wand Crystal at this time.

Like the other ghost variants, a Golem Ghost cannot be hit with certain weapon projectiles. 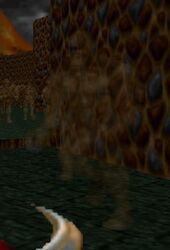 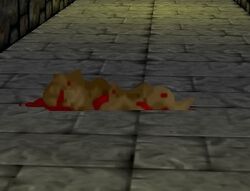 Golem remains after killed by Corvus.
Add a photo to this gallery

Retrieved from "https://heretic.fandom.com/wiki/Golem?oldid=9931"
Community content is available under CC-BY-SA unless otherwise noted.