The Gargoyle is an enemy encountered in Heretic.

It appears as a small red imp-like beast with wings. Although they are the weakest enemy in the game, there are swarms of them throughout the game and they can be a nuisance during battles with stronger foes.

The Gargoyle attacks by flying at the player and the scratching him/her with its claw.

Use the Gauntlets of the Necromancer to kill the Gargoyle. Simply wait for the Gargoyle to fly in for an attack and let it run straight into the electrical bolts. If the Gargoyle keeps its distance, give chase or better yet, switch to the Elven Wand.

The Elven Wand is more than enough to take down a group, just keep them all in front and step back if one or two get a little too close. 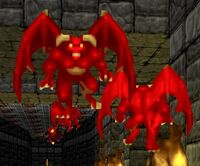 Gargoyle close-up.
Add a photo to this gallery
Retrieved from "https://heretic.fandom.com/wiki/Gargoyle?oldid=9597"
Community content is available under CC-BY-SA unless otherwise noted.