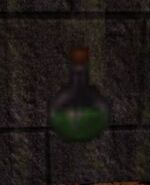 Baratus - Hardly having any knowledge of magic, the Fighter uses flechettes in a very simple way by throwing it like a grenade. They will can explode immediately upon hitting a monster, or will bounce on the floor a few times and stand still for 3-4 seconds before exploding. The explosion causes some splash damage and could hurt the player as well.

Parias - The Cleric's use of flechettes is unique. Instead of causing an explosion, they spawn a cloud of toxic gas, which is highly lethal to most enemies in the game (even some of the more powerful creatures). The gas is toxic to the player as well, and carelessness could lead to an involuntary suicide. Make sure you move away from the flechette before it detonates. Also, the gas strikes even invulnerable enemies, making it invaluable against Centaurs and even effective against the Heresiarch.

Daedolon - The Mage uses the flechette in a manner similar to the Time Bomb of the Ancients. It appears in the air and explodes after a few seconds, dealing splash damage. The player can also be hurt by the blast if they don't move away immediately.

Retrieved from "https://heretic.fandom.com/wiki/Flechette?oldid=8349"
Community content is available under CC-BY-SA unless otherwise noted.