The Fire Gargoyle is an enemy encountered in Heretic.

It is a small, red imp-like beast with wings. Unlike regular Gargoyles, the Fire Gargoyle does not fly at the player, but instead attacks from range by launching a ball of fire.

In addition to the usual clawing attack, the Fire Gargoyle also attacks by launching a ball of fire to the player from range.

Use the Elven Wand to easily kill the Fire Gargoyle whilst dodging the incoming fire balls.

The big issue here is the amount of fire balls being launched at the player. Instead of going up face to face with a group, it is best to take cover and take pot shots, unless there is a big room to play around in. The Ethereal Crossbow and Dragon Claw work best to thin the numbers.

Whilst concentrating on bigger enemies, the Fire Gargoyle can get in plenty of hits. It is advised to step back and take out the little critters first, unless another enemy is closing in. 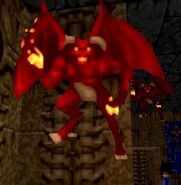 Fire Gargoyle throwing fireball at Corvus.
Add a photo to this gallery
Retrieved from "https://heretic.fandom.com/wiki/Fire_Gargoyle?oldid=9749"
Community content is available under CC-BY-SA unless otherwise noted.