Missile Attack (20-40 Dmg)
Triple Red Beam (1-10 Dmg)
Famine is one of the Four Horsemen of the Apocalypse, General of Eidolon, and the first boss encountered in Hexen II.

He appears at the end of the first hub. the player gains access to his lair through a red portal after defeating the Crystal Golem and breaking the Crystal Wall. He is the weakest of the Four but with 2200 health points and some nasty missiles is still quite a challenge.

Famine attack's with a red missile-like projectile and triple rob beam that steals the player's health to restore his own a little bit. Not to mention, He will teleport throughout the whole area after his health is reduced to half. Once he is defeated, the player will teleport to Mazaera. 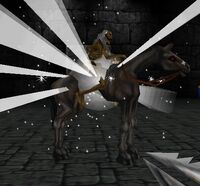 Famine defeat.
Add a photo to this gallery

Retrieved from "https://heretic.fandom.com/wiki/Famine?oldid=10534"
Community content is available under CC-BY-SA unless otherwise noted.