Mace Git (9-18 Dmg)
The Ettin is an enemy encountered in Hexen: Beyond Heretic.

Ettins were once proud fighters of the Legion, serving under Marshall Zedek until he made a pact with Korax, turning the proud legionnaires into the vile Ettins. They are one of the more common enemies encountered in Hexen.

They appear as brown skinned, two-headed, goblin-like creatures. They wear metal armor covering their shoulders with chainmail bases. They carry a mace in their right hand, with which they use to batter the player.

The Ettin attacks by waving its Mace towards the player. Even when up close the attack can miss. It is slow and clumsy and not much of a threat.

When fighting a single Ettin, switch to the first weapon and deliver the few hits it takes to kill it. Be wary of the Mace although it can miss even if the Ettin is up-close. It’s not worth losing the health points when it does hit so keep some distance.

Only when fighting a group of Ettin can they become threat. If the room is big enough and there is room to move back then the first weapon can be used to take down a large group of them. However if there is no room to move (e.g. backed into a corner) then consider taking out the second or even third weapon to mow the group down. A surrounding group of Ettin can knock down a lot of health fast if allowed to do so.

If the Ettin is a part of a more varied group of enemies they should be ignored as the stronger, more dangerous enemies are dealt with first. If distance is kept from the whole group of enemy then the Ettin will pose no threat and will most likely get killed by either side by accident during the battle. 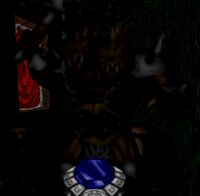 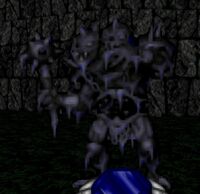 Ettin being frozen to death by Daedolon's Frost Shards.

Ettin remains after being dismembered by Parias's Wraithverge.
Add a photo to this gallery
Retrieved from "https://heretic.fandom.com/wiki/Ettin?oldid=9961"
Community content is available under CC-BY-SA unless otherwise noted.