Triple Red Beam (20-50 Dmg)
Flame Strike (30-50 Dmg)
Skull Attack (15-55 Dmg)
Death is one of the Four Horsemen of the Apocalypse, general of Eidolon and the second boss encountered in Hexen II.

Death has three attacks which he uses: 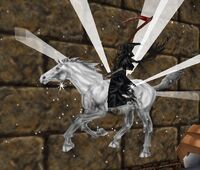 Death defeat
Add a photo to this gallery

Retrieved from "https://heretic.fandom.com/wiki/Death?oldid=10546"
Community content is available under CC-BY-SA unless otherwise noted.