They are much stronger than the Knight Archer and rarer, but become very frequent in Septimus and later back in Blackmarsh, and have the ability to duck to avoid projectiles fired at them.

Archer Lords, much like their weaker variants, launch arrows within 1 to 2 seconds. However Lord Archers always fire the more damaging red arrows. Furthermore they have better aiming, able to fire at where the player is going to be instead of where they are at the time of firing. With more health, this puts the Archer Lord in another class compared to the Knight Archer.

The recommended weapon for the Paladin is the Sword as the fight will be long enough as it is without the weaker Gauntlets. Depending on the situation is may even be required to use the Double-Bladed Axe.

When fighting one Archer Lord, it is important to realize that cover is better than dodging. While it is possible to fight in the open, it is very difficult to avoid some damage over the course of the fight. While this will result in a fight that can last upwards of 30 seconds, it is worth it to come out with minimal damage and Mana usage. 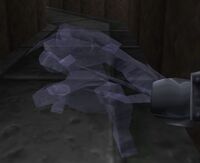 Archer Lord being frozen to death by Crusader's Ice Mace 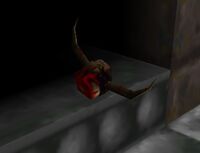 Gibbed Head
Add a photo to this gallery

Retrieved from "https://heretic.fandom.com/wiki/Archer_Lord?oldid=10393"
Community content is available under CC-BY-SA unless otherwise noted.